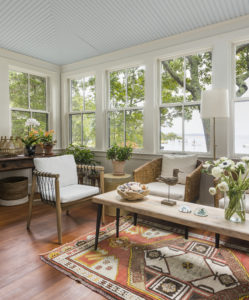 When Liz Farley was seeking solace from the bustle of life and work in the Boston area, she started renting houses in Westport. She grew up visiting Cape Cod, but when her elderly parents sold their home in Osterville, which she had often frequented, she saw that as a sign to identify and embrace another coastal community. “Farmland by the ocean— that is my ideal place,” she says.

Somewhat surprisingly, she didn’t seek out summer rentals, but off-season ones, so as to have a place to get away for weekends. She rented on Westport Point, but while she loved the people, she knew that if she eventually retired there, summertime crowds would make it far busier and reduce her privacy. 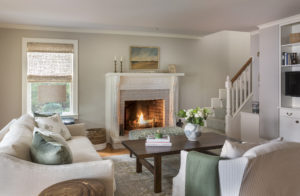 Her next rental was further set back from the shore, on Fisherville Lane. She loved it, and she needed it. She had abruptly left her long-time career and now had a new full-time commitment: taking care of her brother, who had been in a bad accident. 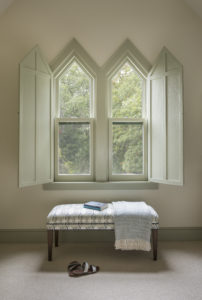 Unfortunately, when she was ready to buy, finding the right property proved elusive. Thankfully, a neighborhood a little further up the Westport River had a home for sale that jumped out at her right away. Cadman’s Neck is a little community that had once been home to a religious camp, where only a dozen or so modest houses or cabins are sprinkled about. This particular house abutted Paradise Hill Farm and Westport River Winery, with the East branch of the Westport River only a stone’s throw away.

It was a small 1,300 square foot Victorian cottage. Never in her wildest dreams did Farley expect to purchase a Victorian cottage in Westport, but she loved it the moment she drove up to it. She bought the house fully furnished. 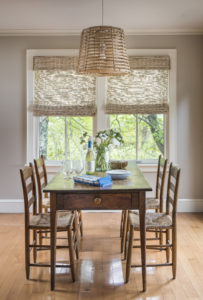 She realized that many pieces in the home—brought back to life with a little Murphy Oil Soap—fit her style perfectly. Those pieces included some artwork, chairs, and the kitchen table, among other things.

She walked into Pam Manchester’s Westport shop and said, “I think I need help. I bought a house and am confused as to how to set it up.” Farley had never worked with a designer before. Even when she renovated her historic Charlestown home, she had only “hired people to reupholster and choose fabrics.” Manchester visited not only Farley’s recently purchased cottage, but her permanent residence as well. And with the boon of quality pieces left in the house, “we had the perfect opportunity to mix old and new,” says Manchester, who was in the antique furniture business before opening Manchester Interiors. She has been advising her ever since, and this year helped Farley choose all new outdoor furniture for the large outdoor patio space. 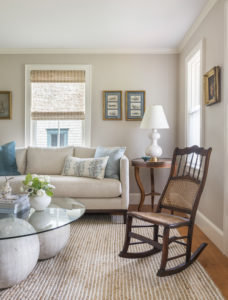 They started with a color palette, working off a base of soft beige, which complements the light blue, green, and various wood tones throughout the house. Then they began addressing her needs—adding antique tables in some places, chairs and other furniture in others. “We didn’t see the need to go shopping in a bunch of antique shops,” says Farley. “Many items came from Pam’s store.” On a few occasions, they had some things custom-made. Manchester had Tiverton’s Scott James Furniture make custom beds, nightstands, and a coffee table. 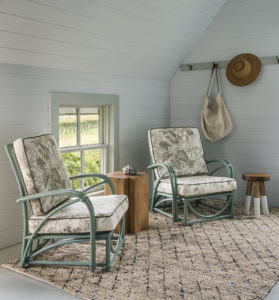 Farley liked the artwork on the walls, from etchings of whales to old portraits of people. Above the fireplace is a landscape of Race Point in Provincetown. After a little research, Farley learned that it was coincidentally created by an artist in Charlestown, where it turns out, the previous owners had also lived. There are a lot of nods to nature, in fact. The organic patterns on pillows in the master bedroom are abstract shapes, looking somewhat like sea anemones. A mirror outlined by what looks to be deer antlers mimics the shape of the Victorian windows and is placed purposely in its spot as the roofline would not accommodate a normal rectangular one. 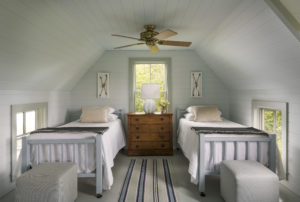 One of the final spaces to tackle was the room above the detached garage. They had a great starting point with wonderful ship lap throughout. Farley kept the two twin beds and painted the frames, but because they were narrower than usual twins to fit the space, she had to have mattresses and box springs custom made. A dresser that had been unused in the garage was cleaned and placed right between the beds to vary the color scheme. “COVID has accelerated my interest in being here full-time,” says Farley. “I love the privacy, and it’s my place of calm and respite.” 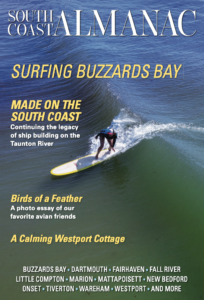 This feature came from our current issue, on newsstands now. You can see the feature as it appeared in our pages right here.