The South Coast is brimming with creative energy, art and culture. In our 2017 issue, we featured 7 artists who help make it so. Over the next month, we’ll be reprinting our 2017 profiles, with some extra photographs. Today, meet Alison Wells who creates inspiring works which celebrate a wide variety of compelling narratives (written by Laura Pedulli and photographed by Elin Bodin). To see the story as it originally appeared in our summer 2017 issue, click here or just read on…

Painter Alison Wells, a native of Trinidad, never imagined she’d end up in southern Massachusetts—or that she’d make her living as an artist. “Every time I made very certain decisions not to get into the arts, my life and universe just brought me back,” she says.

She studied architecture before a scholarship at the Edna Manley College of the Visual and Performing Arts in Jamaica allowed her to do what she loves. She taught art for several years in Trinidad before venturing to New Bedford for graduate school.

In her “Underground Railroad” series, which plays out on canvas and paper, she recreated New Bedford’s history as a destination for escaped slaves, and Frederick Douglas’s pivotal role in bringing them to freedom. Her mixed media collages incorporate painting, photomontage and drawing techniques. Layered into the piece is text from original sources, such as clippings about a man who shipped himself in a box to escape servitude. 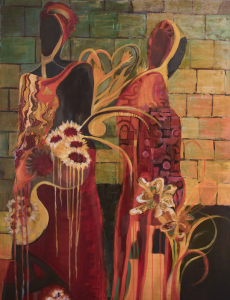 Wells’s “Totem Women” series features Caribbean- inspired abstracted female forms that often morph into column-life structures. Traditional Trinidadian head ties adorn their heads. “I’m from a family of independent women. I have four sisters, and I’m very close to my mother. The women [in the series] are strong, protective and stand their ground,” she says.

“Every time I made very certain decisions not to get into the arts, my life and universe just brought me back,” she says.

The production time of her art varies, she says. “It’s all is in how it’s flowing. It’s in how the painting talks to you. If everything is aligning at the same time, and things are working out, not conflicting, it can move faster.” 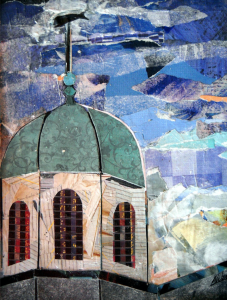 Sixteen years since moving to the region, Wells has settled into her downtown New Bedford studio. In addition, she volunteers at community organizations that promote historical preservation, and has taught painting to both teens and veterans. “The energy for the arts is growing in New Bedford,” she says.

Keep up with our series of artist profiles by signing up here for updates as they are released.