Thanks to our sponsor, First Citizens’ Federal Credit Union, we are celebrating Small Business Week by showcasing two local family businesses who help to make life better (and more fun!) here on the South Coast. Meet the Chases and the Carlsons…..

When you’re in high school and your parents are out of town, the first thing you may think is: party! The last thing you’d think: career path. 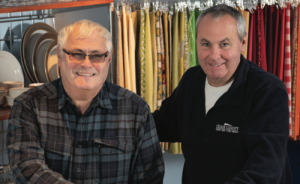 Forty years ago, teenagers Dan and Andrew Chase held a Fourth of July party at their Mattapoisett home. With a little Yankee ingenuity, they built a tent for the party, using sailcloth and wooden poles they built themselves. That was their first tent, not their last.

Today, Chase Canopy is the place to go for full-service event rentals. From their home base in Mattapoisett, they handle several hundred special events each year with thousands of pieces of equipment moving in and out of their doors. When the opportunity arose to buy land right next to their showroom, they jumped at the chance. They turned to Wayne Carvalho and Susan Geista at First Citizens’ for financing to build a warehouse for all that party equipment.

Dan says he got the “warm fuzzies” from the First Citizens’ bankers. “The package they put together was unlike anything I’d ever seen in terms of affordability. Then they worked with us through the whole process. It was a tremendous amount of work and they were right there with us.”

The Carlsons are keeping golf alive and well along the South Coast. 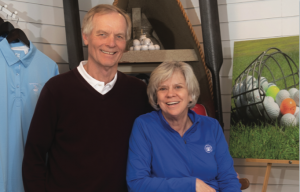 Bruce and Sue Carlson have spent 30 years of married life around golf courses as Bruce built his career in the industry. At a time when many would be thinking of retiring, the Carlsons decided to add on to their responsibilities (running the Marion Golf Course and Acushnet’s Meadowbrook Driving Range) by taking the helm at the Whaling City Golf Course last year.

Bruce had fond memories of the Donald Ross-designed course from playing there as a teenager. With no houses in sight, you’re surrounded by nature despite the city address. Further, the Carlsons are passionate about the game of golf. They didn’t want to see a small course with character closing its doors, and they saw much potential in the New Bedford course.

They worked like crazy to get it up and running in time for last season’s opening but hit a snag at the 11th hour when their financing from a national bank fell through. That’s when Bruce told Sue, “we have to go local, because they’ll realize the value.” First Citizens’ Susan Geista returned their call immediately.

A big thank you to our sponsor First Citizens’ for introducing us to the Chase and Carlson families!

First Citizens’ believes that small business is the backbone of our economy. For National Small Business Week, we salute our business clients—people like the Chases and the Carlsons— who contribute to making the South Coast a better place to live. We are inspired by our business clients and are passionate about collaborating with them as they grow and expand.