In last year’s print issue, we set out to find a half dozen cool overnight adventures on the South Coast. We’re rolling them out online for those of you who don’t have the 2016 magazine. Today’s feature: staying at FDR’s summer home in Fairhaven. If you’d like to see it as it appeared in the magazine, click here. Otherwise, just read on….

The Delano Homestead was the family home of Sara Delano Roosevelt, the mother of Franklin Delano Roosevelt. Young Franklin spent summers, as well as holidays, at this home. He continued to visit as an adult, even visiting with Eleanor when he was president.

Set on a quiet, lovely street that still retains hitching posts from the days of horses and carriages, the neighborhood looks much the same as it did a hundred years ago. 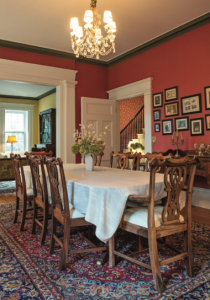 After Sara Roosevelt died in 1941, the Federal/Greek Revival home was sold at auction. In 2001, Paul Beauchamp bought the grand home, decorated it with period furnishings and graciously opened the doors to guests. Old home fans will love the original details: a majestic rosewood banister that gracefully sweeps you upstairs, handmade keys to the the original hardware on the doors, the arched fan transom windows and gingerbread bracket mouldings.

History buffs will appreciate all the historical pictures and books that Beauchamp has collected. Set on a quiet, lovely street that still retains hitching posts from the days of horses and carriages, the neighborhood looks much the same as it did a hundred years ago. 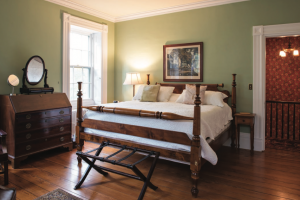 If you want to be in the know about other great  spots and secrets of the South Coast, sign up for our free updates here.
END_OF_DOCUMENT_TOKEN_TO_BE_REPLACED