Our August issue had profiles of some amazing South Coast athletes. In this season of New Year’s resolutions, we thought it’d be great to throw them online for a shot of inspiration, motivation, or just plain appreciation…

At 5:00 am six mornings a week, Genevra “Gevvie” Stone is awake to train.

You’ll likely find Gevvie rowing with local masters men, most of whom have themselves raced as members of the U.S. Rowing team. She often beats them soundly.

Right now, rowing is her job. But she doesn’t see it that way.“There’s something about rowing, including the nap I take after the morning row [she laughs], that makes it seem like it’s not work.” 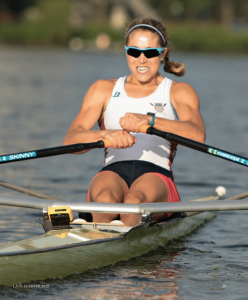 Over a period of 19 years, Gevvie has consistently improved her rowing times. At 34 years old, the Olympic silver medalist is still improving. Gevvie didn’t take a linear path on her way to train for her potential third Olympics. She started rowing in high school, then rowed at Princeton. But she’s careful to add, “I was not an all-star at Princeton.”

After college, Gevvie gave the Olympics a shot. She tried out for the 2008 Beijing Olympics U.S. Rowing team but didn’t make it. The Marion summer resident figured she didn’t have what it took and turned her attention to medical school that fall, ironic that that was her back-up plan.

“I figured that I’d had a good run with my teams,” she says.“I’d won two youth nationals in high school and an NCAA championship with my team in college. But I thought, ‘OK, that part of my life is over. Now I’m going to be a doctor.’”

Yet she still loved rowing. Her first-year medical classes at Tufts Medical School were scheduled from 8:00 am to 4:00 pm each day. At 4:00, she headed to the Charles River to practice rowing.For fun. “Some people studied then; some played video games. I rowed,” she said.

That October she surprised herself by winning the Head of the Charles Regatta, beating two of the women who had competed in Beijing. People started telling her father (who is also her coach) that she had what it took to be an Olympian. By the end of her second year, she approached her Dean to ask for time off to go for it. “It was a once-in-a-lifetime shot,” she told her.

She made the team and competed in London, thrilled to come in seventh in the Women’s Single Sculling. Two weeks later, she returned to medical school, figuring that her Olympic experience was a nice way to bookend her rowing career. “OK,”she thought, “I’ve been an Olympian.”

Except it wasn’t the end.

She kept rowing and her times kept improving. Most importantly, she says, “I missed the rowing.” Two years after returning to medical school, she went back to the Dean.“You know that once-in-a-lifetime thing? I think it may be a twice-in-a-lifetime thing.” She finished up the year, passed her medical boards (an eight-hour exam) and a week later, she raced in theWorld Cup. She was on her way to another Olympics.

Rio is where she medaled in 2016, the place where she stood on the podium with silver around her neck, feeling all the cheesy things you imagine. She says it was surreal: “I hope everyone has the opportunity to feel that special and happy in their life.” 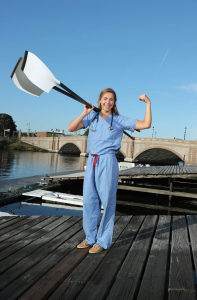 She started her medical residency right after the Olympics until August 2018 when she took time off to train again. In some ways, these shifts between medicine and rowing have enhanced her abilities in each. She says there are parallels between the two: focus, persistence, drive, and teamwork. And her time away from focused rowing has created an excitement and appreciation for the sport that probably wouldn’t have happened if she’d been solely focused on it for 19 years.

For now, she’s training at the Cambridge Boat Club, spending time in Marion when she can. Marion is the place where she spent whole summers and every weekend all year long as a kid. On Friday afternoons, she’d get picked up from school and the whole family headed to the South Coast. On Monday mornings, her siblings ate Eggo waffles in the backseat on their way back to elementary school in Newton, their weekday home. She and her dad have used Snipatuit Pond as a training ground with their single shells.

The 2020 Tokyo Olympics via Snipatuit Pond is an interesting route. Sort of like becoming a doctor in between Olympic performances.

Subscribe to South Coast Almanac so you don’t miss out on stories like Gevvie Stone’. Our mission: to explore the people and places of the South Coast. Join the tribe and you’ll be supporting stories like this one. We’ll deliver 4 issues each year to your door for just $19.99. Subscribe right here.

This entry was posted in People We Love and tagged in Olympic rowing, U.S. Rowing.